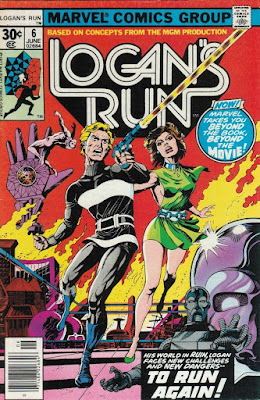 Hello, Runners! In this episode, dystopian love slaves Chris (@AceComics) and Reggie (@reggiereggie) examine the future world of hedonism and group suicide when they read Marvel Comics' Logan's Run #6, written by John Warner and drawn by Tom Sutton and Terry Austin! After discussing the film that this series initially adapted, they dive right into the first comic book after that five-issue adaptation that was meant to continue the story, despite the wishes of the movie studio. And while they're at it, our New-You patrons divulge the plot of the seventh and final issue. They talk about why this series was so quickly truncated, then talk about the original novel by William F. Nolan, and the many adaptations and incarnations that resulted over the years. You'll need your running shoes for this one, don't miss it!