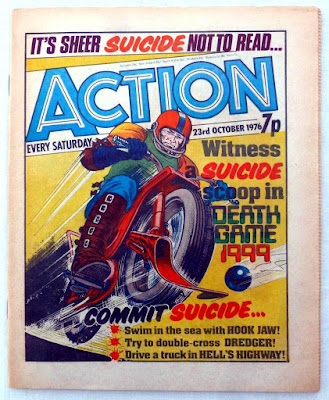 'Ello, Limeys! In this episode, Anglophiles Chris (@AceComics) and Reggie (@reggiereggie) look at a comic book so nasty, it was banned in the United Kingdom: Action #37, published by IPC in 1976! After some information about the people who made this comic and just what the heck it is about, graduates of the Winona Ryder Acting Society go through every brutal story in this crazy weekly comic book, doing their best to provide some color to the commentary. After a break, they talk about what happened to the folks from Action, and look at some movies made illegal in the United Kingdom and labeled "video nasties" in the early days of the VCR. This episode is more dire than an encounter with Hook Jaw, you don't want to miss it!