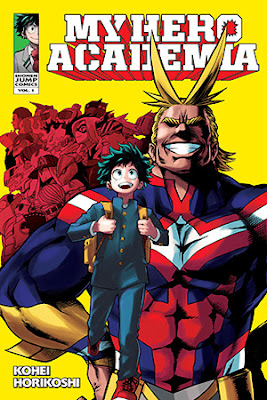 Hello, brave heroes! In this episode, quirkless wonders Chris (@AceComics) and Reggie (@reggiereggie) look at a popular manga series, created and produced by Kōhei Horikoshi: My Hero Academia vol. 1, released in North America in 2015! After a brief look at the budding creator Horikoshi, they dive right into the first six chapters of this weekly Shonen manga, compounding their usual embarrassment by mangling every Japanese name they encounter. After an international music break, our heroic hopefuls return to look at the phenomenon that is My Hero Academia, and talk about some other comic book-based schools...some which do not produce heroes as efficiently as U.A. High. Plus: correspondence with Jeremiah! The episode is sure to be Plus Ultra, don't miss it!


Thanks to Luke Hollywood for the suggestion!