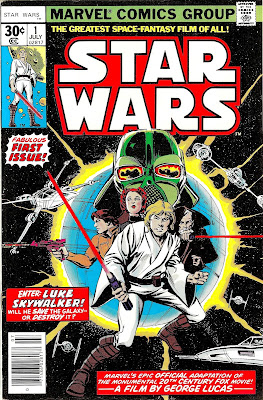 Beep beep tweet, folks! In this episode, Nerf herders Chris (@AceComics) and Reggie (@reggiereggie) look at some events that occurred some time in the past, in a remote corner of the universe, as depicted in Marvel Comics' Star Wars #1 by Roy Thomas and Howard Chaykin, published in 1977! After some biographical information about these legendary creators, and a little background information on how the deal was struck, they go through every page of the inaugural issue, butchering the voices as politely as possible. After a break, these rebel traitors return to wrap up their histories of Mr. Thomas and Mr. Chaykin, and wrap it all up by talking about how the comic book fared at Marvel going into the 1980s–including an aside about a giant green bunny? The episode is more fun than a barrel full of light sabers, you don't want to miss it!