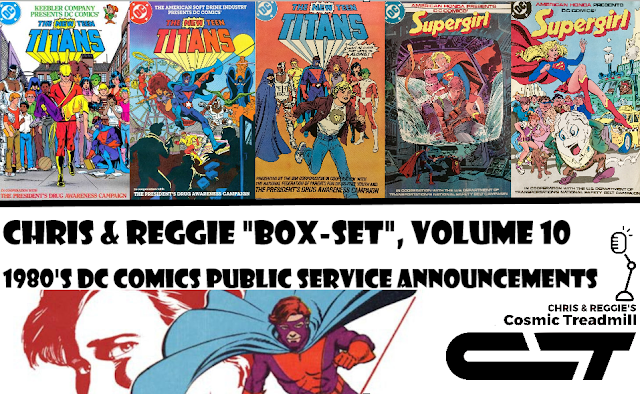 For this box-set, we decided to compile those Reagan-era Public Service Announcement comics DC put out.  What're those?  Well... for some context:

Between the years 1983 and 1986, DC Comics... in association with various companies (including Keebler, the American Soft Drink Company, IBM, and American Honda) as well as the United States Government, put out five special comic books.

Three of these comics featured the New Teen Titans, and were presented by The President's Drug Awareness Campaign (featuring a letter from then-First Lady... and potential Manhunter... Nancy Reagan).  The remaining two starred Supergirl.  Those were presented by the United States Department of Transportation's National Safety Belt Campaign (these opened with a letter from then-Secretary of Transportation, Elizabeth Dole).

We covered the lot of 'em... and now, you can find our thoughts right here in this handy "box-set".