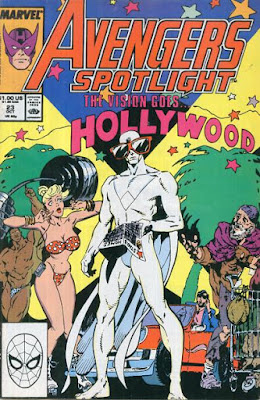 Good evening, late-nite listeners! Heeeere's Chris (@AceComics) and Reggie (@reggiereggie) bringing you another deep dive into a comic book, this one specially chosen by Aaron Anderson: Avengers Spotlight #23 from Marvel Comics! After the usual biographies for Howard Mackie, Al Milgrom, John Byrne and Kieron Dwyer, the Hollywood Kids read both stories contained in this issue--the second one of the first appearances of The Vision in his all-white look! Then they talk about an old rural discount chain from whence Aaron's issue derived, and wrap up with a list of superheroes that had arguably unfortunate changes to their standard costumes. Even one character that never really had a standard costume! It's a great show, ladies and gentlemen, we hope you'll tune in for the duration.

Thanks again to Aaron for the suggestion!
And here we present to you all of the embarrassing superhero costume changes mentioned in this episode--listen to the podcast for more details!
Hey, You've Got to Hide Yourself Away

Very early on in their superheroing career, Sue decided the ever-lovin' Thing needed his baby blues concealed
...but at the first scrap, Ben shucked his new duds for the classic tightey-blues we know and love today.
Beast, We Hardley Knew Ye

Hank McCoy began as a oafish-looking but brilliant white dude in the 1960s
But in the 1970s, when everyone was a bit woolier, he mutated into the shaggy blue monster
Twenty years later, he had a secondary, and decidedly more feline mutation...that seems to have subsided.
I'm Every Wonder Woman

Wonder Woman's costume design is so iconic, it seems unassailable. And really, it's mostly had superficial changes since its debut in 1942.
Except for this one time...
Really, the loss of Diana's powers and ever-changing fashion show paled in comparison to the humiliation endured by I-Ching.

Let's Not Forget Hawkeye the Greek

The Vision's costume change is highlighted in Avengers Spotlight #23, but Clint Barton also sought a new look, going from this
To this
...and quickly back again. Ol' Triangle Eyes, we missed ya!

We could show off a lot of the crazy costumes Kitty had over the years, but why bother when the folks at the swell blog 13thDimension have done it already, and better, right here?

Give Back the Pixie Shoes

Dick Grayson wore this classic Robin outfit into his late teens...which was admittedly probably too long to have bare legs.
So he upgraded to this!
I think this toy company is exaggerating too much...it's a high collar, not a car spoiler.
Punishing the Punisher

Who can deny Frank Castle's classic Armed Monorail Operator's look?
Apparently, Mike Baron and Hugh Haynes, who saw fit to reimagine him as a spectral Angel of Vengeance with spirit guns
The fun wasn't over for Frank, though. He'd be torn apart and then reassembled as Franken-Castle for six months worth of comics!
Stripper Sue

One thing you can say for Sue Richards, she was never sexualized. She wears the same flavorless jumpsuit as everyone else on the team...er, except for Ben Grimm. And Johnny, when he flames on.
Except for this one time...
Batman to the EXTREME!

Bruce Wayne's night clothing changed little since Neal Adams and Carmine Infantino debuted his "new look" in the late 1960s
But when he broke his back and had to hand the mantle to Jean-Paul Valley, Azrael took some liberties with the design...
Guy Gardner, Native American Alien

Guy Gardner was always the wayward Green Lantern, even his initial Post-Crisis outfit was a "bad boy" take on the standard issue
But when he manifested some dormant alien powers, he went full tribal and...well...
Electric Supes

Superman's costume is probably the most iconic set of underclothes in history
Shortly after returning from the grave, he did sport a timely mullet. But his costume was the same as it ever was.
That changed when he turned into Electric Superman Red and Blue...
...an homage to this Silver Age story that was only half as ridiculous.
The two Supermen made nice and combined to form Electric Superman, who actually stuck around in this form for longer than most people expected him to.
But come now, it wouldn't last forever.
- February 18, 2018