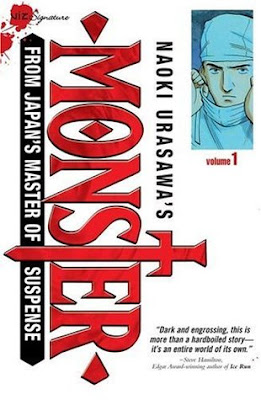 Konichiwa, comics enthusiasts! This week, Chris (@AceComics) sends Reggie (@reggiereggie) into unfamiliar territory and tasks him with reading his first ever tankobon collection of manga: Naoki Urasawa's Monster vol. 1! Originally published in Japan in 1994, then translated and republished in North America in 2006, our fellows read all eight chapters of that first volume, after a creator bio and a very brief description of manga. Then, they tell the rest of the story, as detailed in seventeen further volumes, and conclude with a look at advancements in neuroscience that were not necessarily expected...or perhaps entirely warranted. It's a spooky gross-out of an episode, so be sure to listen with your significant other!